The overall goal of our research is to understand the molecular and cellular mechanisms underlying autonomic control of metabolic and cardiovascular functions in health and disease. Our laboratory uses multidisciplinary approaches and stat-of-art molecular and physiological techniques. 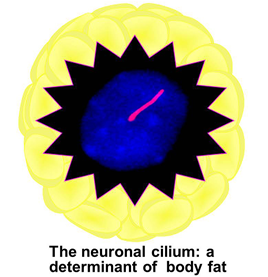 Ongoing studies focus on dissecting the role of cilia-related proteins such as the BBSome in the regulation of regulation of physiological processes related to energy homeostasis and cardiovascular regulation. A cilium is a hairlike cellular projection found in virtually all cell types of the mammalian body. This evolutionary conserved organelle plays a fundamental role in the regulation of several biological processes. Understanding the role of cilia-related proteins such as the BBSome in metabolic control has garnered great interest due to the fact that components of the phenotype associated with patients lacking this protein complex such as obesity, diabetes and hypertension are common in the general population. Combining physiological and biochemical approaches we discovered that the BBSome is critically involved in the regulation of energy balance. We identified specific abnormalities in the hypothalamic pathways controlling energy homeostasis in mice bearing targeted deletion of the BBSome. Consistent with this, we uncovered a critical role of the BBSome in mediating the trafficking of receptors such as the leptin receptor and insulin receptor to the cell membrane. We also implicated the BBSome as an important player in vascular function and blood pressure control. Ongoing work is focused on understanding the exact mechanisms that underlie BBSome control of these biological processes. 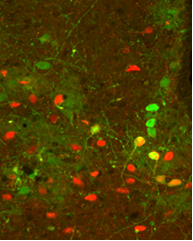 Another major area of effort of the laboratory is aimed at identifying new molecular and cellular pathways within the central nervous system and peripheral tissues that are critical for metabolic, sympathetic and cardiovascular regulation. We discovered that hypothalamic mTORC1 signaling is a key determinant of sympathetic nerve activity and arterial pressure. Our work also highlighted the importance of mTORC1 signaling in the vasculature for endothelial function. In addition to mTORC1 we have identified the neuronal actions of several new proteins and hormones including RAMP1, Bmp8b, amylin, thyroid hormones, FGF21 and estradiol as critical regulators of regional autonomic nerve activity with important implications on energy balance and cardiovascular homeostasis. 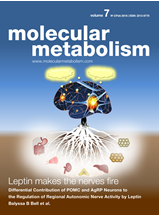 The work performed in the laboratory has also been critical in understanding the molecular mechanisms and brain regions involved in leptin- and insulin-mediated regulation of regional sympathetic nerve activity and attendant cardiovascular and metabolic responses. The combination of physiologic, molecular and genetic methodology allowed us to create a body of work that established the extreme selectivity of the molecular pathways and brain regions involved in leptin and insulin regulation of regional sympathetic outflow and other physiologic responses. In addition, we showed that obesity is accompanied by selectivity, not uniformity, of leptin and insulin resistance. As a consequence, the ability of leptin to increase blood pressure is preserved in obesity despite resistance to the metabolic actions of this hormone. These findings provided a mechanistic explanation for the role of leptin and insulin in mediating the hypertensive and cardiovascular side effects of obesity. Undergoing work is aimed at deciphering the neuronal and cellular bases of selective leptin and insulin resistance in obesity and how to harness this knowledge to improve therapy.